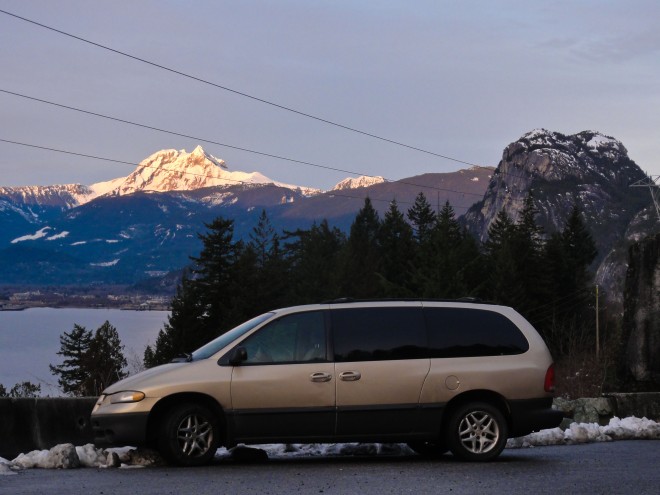 I know its not the right season to be rock climbing in BC, but I couldn’t drive right through Squamish without a trip to the crag. The forecast looked good, considering the time of year, +9°C for the high and partly sunny Saturday and Sunday. My main problem was that I’d never climbed here before, and although its a world famous climbing destination, there’s no simple online guide like I’m used to at the Red. In fact I still can’t find the climbs I did today to see what other people are saying about them. Kind of crazy but the place mostly exists in guidebooks, not online.

So I reached out to a network I’ve used before, ClimbFind.com. I posted a partner call for anyone willing to do some sport climbing or bouldering in the cold, figuring why not? I got a response right away from a Russian guy named Dmitry. He said we’d meet at 10am to give the rock some time to warm up. Unfortunately, there’s not much sport climbing in the sun. Most the good winter lines are trad, and I’m a total trad rookie. But Dmitry knew the area and we made due with the conditions we had.

Dmitry was stoked to have a partner, this was his first time climbing outdoors this year. Mine too. We started at the Smokey Bluffs, an area with low angle slab climbing and mixed lines. Since I’m not a traddie, Dmitry lead the routes and placed the gear. I was reminded how terrible I am at slab climbing, and the 5.10s gave me a battle. It was really nice though, sunny and not too cold. The ground was frozen when we arrived, and the rock was dry, but by the time we packed up the ground had thawed and melted into a muddy mess. It felt really good to get on some rock again and get a taste of Squamish.

We ventured next to Murrin Park for some sport climbing. It was colder here, shady and snowy. Unlike the bluffs, we were the only climbers. Dmitry said he always has trouble finding climbing partner. The locals from Vancouver only want to go when the weather is nice, but he just wants to go all the time. So he checks for partners online, and had some good stories about his experiences with randoms, like the girl who said she could climb 5.12 sport but pulled on every piece of gear on their 5.9 slab warmup.

At Murrin, Dmitry had me lead a 5.11b mixed line. It had two large cam placements at the bottom. I’d never placed a cam before, but Dmitry showed me the basics and I decided it was a good place to learn. The stances were very secure, and I had plenty of time to place my pro leisurely. One of the stances had a bomber fist jam and bomber kneebar. I was stoked. The placements felt secure and I moved on with confidence. Dmitry said the crux was at the 3rd bolt, and he’s never been able to do the move but felt confident I could do it. I eased my way up the bolted section to the crux, feeling good and warm. It tricked me at first, because the temptation of an obvious high right foothold lures you in. But after placing the foot and gauging the move, I decided it wouldn’t work for me. I repositioned and found a terrible high left foot on a tiny nub instead. Dmitry called it a “pimple”. But after the slab climbing we’d done earlier, I felt like it would hold. It worked, and I sent. Dmitry climbed it next, trying my beta in favor of his. It worked for him, too, and he sent for the first time.

After another bouldery 5.11b face climb, we moved to an overhanging section with some stout 11s and 12s. I jumped on the 5.11d, not wanting to push it too hard after a month of not climbing. It was a good choice, the route was fun and challenging. I climbed to the crux at the last bolt on point, but got spit off throwing to a tricky hold. I sussed it out and tried again, and again, and again. I must have fallen at that crux a dozen times. I was exhausted, and I really thought I couldn’t do it. The hold I kept going for was a sloper, and it just wasn’t good enough for me to stick it. I proclaimed I couldn’t do it, and I’d need to bail. But then it occurred to me that there might be a way to go left, instead of going right as I’d been trying. The holds looked unused, like no one goes that way, but what the heck. I gave it one go, and it went. Even in my exhausted and frustrated state it worked for me, some obscure beta that no one else uses. Dmitry followed, and after a few hangs his long reach enabled him to do the beta that kept shutting me down.

All in all it was a great day. Pleasant temps, a great climbing partner/guide, and numerous firsts. Today was my first day climbing of the year, my first time climbing in Canada (new country on the roster, whoot!), and my first cam placement. Good times 😀