Family is very important to me, and I’ve been blessed with a great one. My parents have always been a great inspiration for me. They have a healthy relationship that is sustained by a deep, unrivaled commitment to each other. They support each other constantly and fill each others worlds with love and praise and appreciation. They have created a healthy environment for my sister and I to grow up in, and we are deeply thankful for them and the proud example they have set. We truly enjoy hanging out with each other and spending time together as much as possible. Even as a teenager I think I spent more time with my family than any of my friends.

We would always have dinner together as a family, every night of the week. Mom’s cooking goes unrivaled in my book. Dad would always compliment her cooking, every single night, and make sure Brie and I did the same. But the best night was Friday – family pizza night – where we would form an assembly line and each person would take on a specialized role in the construction of immaculate home-made pizzas. We’re definitely a family of traditions, both weekly and annual. Every Thursday was date night for Mom and Dad, and every Sunday was family night where we’d go and do something together as a family. We also took family ski vacations every year, probably the primary source of my skiing addiction and travel bug.

Since graduating high school, however, I’ve lived away from my family more or less for the past nine years. Much of my vacation/travel time has been spent on visits to see them, and theirs to visit me, but it’s never enough. I plan to conclude my vannin’ adventures in Pennsylvania where I can be close with them and spend more time together once again.

My dad is my idol. He seems to have fun every day of his life, and he makes sure the people with him have a good time as well. He has a gravitational personality that makes you want to be around him. He’s quirky and hilarious, somehow a never-ending supply of creative humor. He tells jokes that don’t seem to make sense, then doesn’t explain them, only to leave you hanging in wonder until you eventually figure out what he’s talking about. It’s always funny, just a question of whether you can follow him or not 🙂 Here’s a sample Dad joke:

If you don’t get that one, try re-telling it to someone else 🙂

He has many talents and many passions. Encompassing all of them is his optimism. Dad has decided to live his life to its fullest. He believes that if he leads a positive life, does good things, helps others, and puts his heart into everything he does it will all work out. And he’s completely right. Outwardly he appears to be extremely lucky. Many good things happen to him that don’t seem to work out naturally. I’ve come to believe it’s his positive attitude, confidence in himself, and faith in the good of the world that bring fortune into his life every day. I aspire to live with the zeal that he does.

Mom is the source of stability and consistency in our family. She keeps us safe, healthy, and on task. She remembers everything and knows where everything is. She loves checking in with everyone and loves it even more when you check in with her voluntarily. That way, she can keep her eyes ahead and make sure every plan is executed flawlessly. Mom has some super-human powers such as seeing into the future and seeing out of the back of her head in a way that only a mom can. She is the ultimate multi-tasker.

Among the many lessons I’ve learned from Mom, the one that stands out the most is to follow your heart. I sometimes tend to navigate this world with logic and reason, but I always come back to Mom’s greatest lesson. This is a big part of how my recent adventure has unfolded. Surely the adventures I’ve sought and the life I’ve led would not have been possible without her wisdom. Whenever I need wisdom and guidance in this complicated world, Mom is there to provide clarity and support. I know she worries about me, but somehow she’s always supported me in my various endeavors despite her obvious concern when I do something like huck a backflip off a cliff at Squaw. She just tells me to wear a helmet and have health insurance. 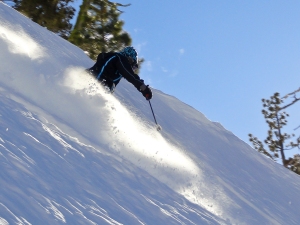 My older sister and only sibling, Brie is the organized one of the bunch. She plans ahead and rarely deviates from it, making her extremely reliable. It must drive her nuts when she makes plans with me since I plan late and change plans on the fly all the time. She loves snow skiing and waterskiing and crushes at both, but otherwise takes it easy. She’s academically brilliant and can learn anything she puts her mind to. She takes responsibility very seriously, and when she commits to do anything she’s all in. Brie follows the rules, and proceeds carefully through every situation. She was the type of kid who would go out of her way to ask our parents if she could have a stick of gum instead of just helping herself.

Our bond runs very deep since we’ve experienced so much together. Brie always knows the right thing to do, and I like to check in with her when I’m unsure. She has always been neat, but she now has the most organized household I’ve ever seen. Every drawer you open in a museum piece, there is not a thing out of place. But for Brie, that’s all about to change…

Brie is pregnant! She’s expecting a baby boy in April, and the whole family is so excited. I cannot wait to be an uncle, and I’m sure Brie is going to be an incredible mother. I would know, she’s been taking care of me my whole life 😉

Jonathan is the newest member of my immediate family. He has been happily married to Brie since August 2009. Although he was not a skier at the time, Jonathan has had some catching up to do to keep up with this family. He now snow skis and waterskis just like Brie, and genuinely enjoys both. Jonathan was raised in the city/suburbs, and my Dad likes to challenge him with “manly” tasks like gathering firewood and running the chainsaw. He really appreciates our family, and we’ve spent many great times together. Whatever the family has decided to do, Jonathan is up for it. He’s always game for a new adventure and he’s found lots of them with us. He’s also not afraid to fall asleep in the middle of anything he finds boring, a trait which definitely has its funny moments 🙂